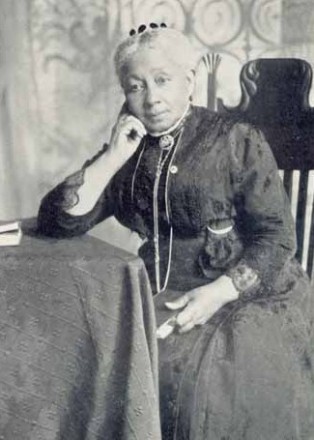 I created the banner for this blog while reading about the first African-American woman physicians.  Susan McKinney Steward was the first in New York and the third in the nation.  If anyone knows how to contact any of her surviving relatives, it would be lovely to see if there are any remembrances of her to add here.

To find more information about her, I put a bunch of fabulous librarians on the job.  They found some terrific information, but in tracing her genealogy, got to a generation of the family where the names were too common to trace the family further toward the present.

Here’s some of the info they found:

Physician. Born Susan Maria Smith in Weeksville, Brooklyn, New York, the seventh of Sylvanus and Anne Smith’s ten children. She grew up on her father’s successful pig farm, and studied organ, serving as the organist at Brooklyn’s Siloam Presbyterian Church and the Bridge Street African Methodist Episcopal Church. In 1867 she enrolled in Dr. Clemence Sophia Lozier’s New York Medical College and Hospital for Women studying homeopathic medicine. She was graduated valedictorian in 1870, the first black female doctor in the state of New York, and the third in the nation. She established a successful medical practice in Brooklyn treating a wide range of patients distinguishing herself particularly in pediatric care. In July 1871 she married William G. McKinney, an itinerant preacher, and they had two children. She was active in Brooklyn Women’s Homeopathic Hospital and Dispensary, the Brooklyn Home for Aged Colored People, the Bridge Street’s missionary, and was president of the Women’s Christian Temperance Union. She founded the Women’s Hospital and Dispensary, the Women’s Local Union of New York, and the Equal Suffrage League of Brooklyn. Her husband died in 1892 and four years passed before she married Theophilus Gould Steward, chaplain of the 25th U.S. Colored Infantry, known to history as the Buffalo Soldiers. She would travel with him to postings in Montana, Nebraska, and Texas until he mustered out in 1907 at which time they joined the staff of Wilberforce University in Ohio, Dr Steward serving as the college physician. In 1911, she presented her paper, ‘Colored American Women,’ before the First Universal Race Congress in London. She died at the age of 71 and W.E.B. DuBois delivered the eulogy at her funeral. Brooklyn’s Dr. Susan Smith McKinney Junior High School and the Smith McKinney Steward Medical Society are named in her honor.

I wonder what book she is holding, and which one is on the table!

Source information (site seems to be down)

This entry was posted in Medicine and tagged Medicine. Bookmark the permalink.