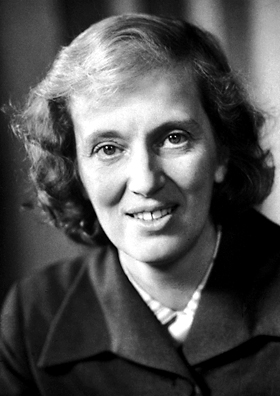 This picture of Dorothy Hodgkin is from the Nobel Prize website, which states that she won the prize “for her determinations by X-ray techniques of the structures of important biochemical substances”.

The following biography is quoted from a Public Broadcasting Service (WGBH) site A Science Odyssey: People and Discoveries

Though born in the twentieth century, Dorothy Crowfoot Hodgkin had a typical late-nineteenth century upbringing. She was born in Cairo, Egypt, then a British colony. When Hodgkin was four, the family was back in England and World War I broke out. The parents returned to Egypt, leaving the children with family and governesses for four years. Hodgkin found an interest in chemistry and crystals, a popular hobby for women of leisure in the 1800s. But on her sixteenth birthday, she received a book by William Henry Bragg (a Nobelist in physics) about using x-rays to analyze crystals. She had found her life’s work.

When Hodgkin graduated from Oxford in 1932, jobs were scarce. She found a position in an x-ray crystallography lab studying biological crystals. This technique helped tease out the structure of molecules. Though diagnosed at age 24 with rheumatoid arthritis, she became one of the most skilled crystallographers of her time. In Cambridge and later at Oxford, she always chose projects that no one else thought quite possible. She ran into Ernst Chain one day, who was beaming from his recent animal trials of penicillin. It took four years, but she cracked penicillin’s complex and misleading structure in 1946. That knowledge would help manufacturers create semisynthetic penicillins. Ten years later she announced the structure of vitamin B12, and in 1964 won the Nobel Prize in chemistry. In 1969, she finally solved the puzzle of the structure of insulin.

Since her youth, Hodgkin was involved in organizations promoting peace, such as the League of Nations. Her mother had lost four brothers in World War I. In addition, Hodgkin had organized an international association of crystallographers. In 1953, she was denied a visa to the United States to attend a scientific conferences because she had belonged to Science for Peace, a group that included some communists. She was later allowed into the country with special permission of the attorney general. She retired in 1977, remaining active in peace organizations. In 1990, her passport was approved “for indefinite reentry.” She died in 1994.

Update 5/12/2014:  Thanks to Sam Kome, who pointed out that Hodgkin was honored with a Google doodle.

See this article in the Guardian for a discussion of the doodle.

Thanks to Merrilee Proffitt, who tweeted about these archives.