Thank you to David Gross, great-grandson-in-law of STEM-ma  Maria Dee Salmonson, who took the time to write this terrific post about Fannie Gordon.  If anyone has a picture of her that we could share, we’d appreciate it. 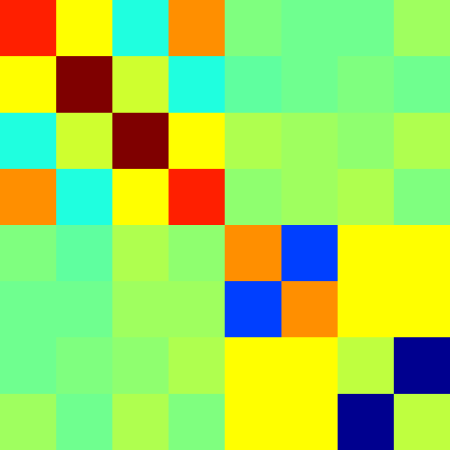 Fannie M. Gordon operated computers in the 1950’s Los Angeles office of the National Bureau of Standards (NBS), known after 1988 as the National Institute of Standards and Technology (NIST). She contributed to some great and lasting works in numerical linear algebra, and appears to be acknowledged only in the footnotes of mathematical history. After the publication of Lanczos’ eponymous algorithm and a another great work by Hestenes and Karush, a colleague of theirs by the name of Rosser came together with them to publish a test case that would apply to both, and all future methods of finding tricky eigenvalues*. It is essential that we find the eigenvalues of matrices because they (and their relatives) can tell us about the short, medium, and long term behavior of real life systems like the economy or the climate. This was considerably difficult, and required calculations that ran for days on behemoth computers. Given the importance of having a benchmark for these calculations, the four published a paper about theirs, with Gordon only finding acknowledgement elsewhere than on the title page: 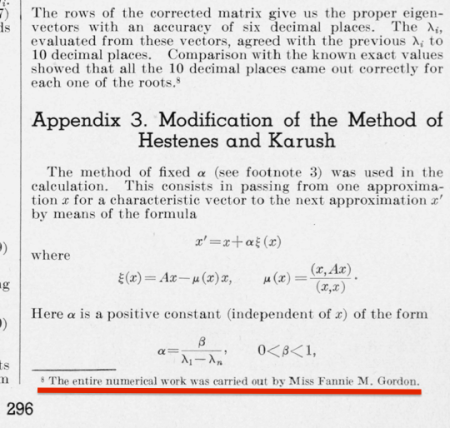 There’s isn’t much to be found about Gordon, but it appears she had worked with Lanczos before at the Institute for Numerical Analysis (INA, the name for the offices of the NBS on the campus of UCLA). With this hint a much more appreciative account was uncovered in Lanczos’ previous paper. It displays his passion in explaining the high fidelity calculations the algorithm requires, the astonishing results it provides, as well as deep admiration for that work contributed by Gordon to the collaboration: 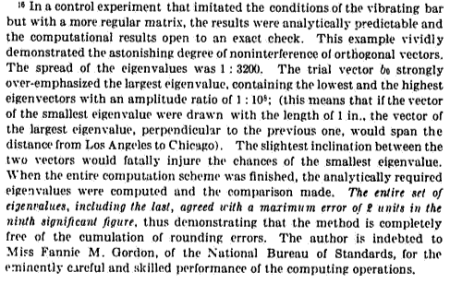 While she didn’t go down in the record books like Lanczos and friends, it’s great to see that her work behind the scenes was appreciated and talked about, a part of mathematical history we don’t talk about now as much as we should. For another peak into this corner of the mathematical world, check out the list of all of the NBS/NIST staff members mentioned in A Century of Excellence in Measurements, Standards, and Technology: A Chronicle of Selected NBS/NIST Publications, 1901-2000 [Text, Google Books]. *On eigenvalues: when you go out in the world, you make an impact and push things in the direction of the values you believe in, and certain values are more important to you than others. Matrices (arrays of numbers) do the same thing with the (eigen)values they espouse. Check out a longer post about the eigenvalues in this test matrix and the deeper dive into computational history from which this post was adapted.

This entry was posted in Computer Science, Mathematics. Bookmark the permalink.