This GGSTEM post is from Judy Pipher, University of Rochester, Prof. Emerita, Dept. Of Physics and Astronomy.  She says:

Jill Tietjen, professional engineer, author and speaker, as well as President of the Board of Directors of the National Women’s Hall of Fame, suggested that I submit a bio to “Grandma got STEM”. I qualify as a grandma (8 living grandchildren ages 15-29), 2 great-grandchildren (2 and 6), and the six year old has a sibling arriving this December. I am a very proud grandma and also gg (to the 2 and 6 year olds). When I participated in a 2013 National Women’s History Month panel in Seneca Falls NY where I live, there was a photo and article in our local paper of me representing current day scientists, and Melinda Grube playing Elizabeth Cady Stanton, discussing similarities and differences in women scientists then and now. My oldest grand-daughter photographed the page, placed it on facebook with the note “That’s my Gma on the front page!” Photo below.

I am STEM qualified: PhD in Astronomy, Cornell University, 1971. Since that time, I have been at the University of Rochester. I retired as full time faculty member in 2002, but continue to conduct research there. My focus since graduate days, has been infrared astronomy. In those days, we hand-built single pixel infrared sensors for rocket astronomy experiments. My thesis research concentrated on dust emission from the galactic plane, and from massive star formation regions. Once I arrived at the University of Rochester, I began an infrared group. Although I had not yet obtained funding, my Cornell advisor gifted me with a dewar (which holds liquid nitrogen and liquid helium to cool the sensors) and I began the process of working on new sensors. Infrared sensors need to be extremely cold in order to be sensitive. With time, I gained funding, faculty colleagues at the University, students, and new projects. 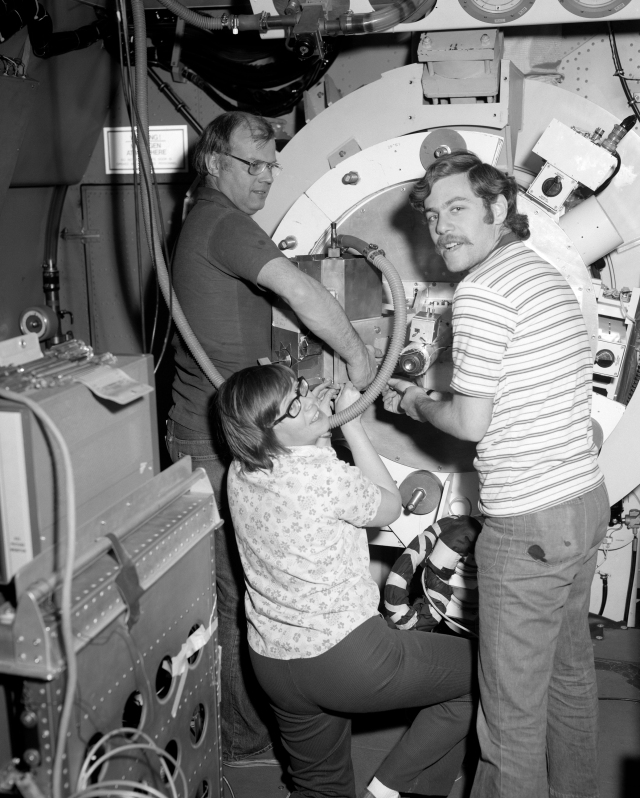 My first projects involved development of an infrared instrument to fly on the Kuiper Airborne Observatory (see photo above) and the first of many infrared array camera developments. In 1984 my fellow infrared astronomer faculty member (the first of several that the department hired) and I became members of the Infrared Array Camera team for what was renamed the Spitzer Space Telescope. It was 20 years before it was launched, and it is still obtaining observations today with the sensor arrays we developed with Raytheon. I concentrated on star forming region research, and we are still publishing papers on this topic with Spitzer data. In the meantime, my group has been developing new infrared sensor arrays for space application. One current interest is NEOCam – it was granted technology funding in 2011 to develop special arrays that can be passively cooled in space by absorbing the cold of space efficiently, while radiating away heat generated by the instruments. Our hope is that NEOCam will be detecting Near Earth Objects – asteroids and comets which are close to the Earth, and may impact it – in 2018. Another current interest is the development of THz arrays for commercial application. For this body of work, I received the Susan B Anthony Lifetime Achievement Award in 2002, and was inducted into the National Women’s Hall of Fame in 2007. Other commendations are more field-specific. The photo at the top is the official photo for the 2007 Induction.

Meanwhile I am proud to serve on committees and Boards in my community – the National Women’s Hall of Fame, the Seneca Museum of Waterways and Industry, and the Cayuga Lake Watershed Network. And as a member of the NY Space Grant Consortium, I make every effort to encourage young women to enter STEM fields. It is unfortunately not unusual to be the only woman in the room when sensor results are being reported. Astronomy itself, does somewhat better – up to 15% US astronomers are women. But this number pales in comparison with the statistics of our European and Asian colleagues. “Women hold up half the sky” – part of a proclamation by Chairman Mao! has been coopted in a 2009 book by Nicholas Kristof and Sheryl WuDunn, and from which a Half the Sky movement has been formulated. In the US it is time for 50% of young women to pursue STEM educations so that in 50 years, “Grandma got STEM” will be unnecessary.

This entry was posted in Astronomy. Bookmark the permalink.