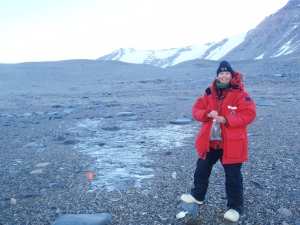 Nematodes make me smile. That is what I’m currently studying. They are really important. Nematodes are part of the food web beneath our feet – in the soil. We have to sustain our soils.

I study nematodes (roundworms) and other invertebrates that form a critically important part of ecosystems: life in the soil. My work over the past decades has shown that soil invertebrates are key actors globally in the major ecosystem process of decomposition.

I love Antarctica – that icy continent at the bottom of the earth. I’ve now had the distinct pleasure of working in the Antarctic Dry Valleys for 25 seasons – in the summers – researching my favorite – nematodes. I am delighted that the Wall Valley in Antarctica and a soil microarthropod species are named after me.

Antarctica is such an amazing place – in the summer there are 24 hours of daylight although it is still very cold. In the field I am housed in what are called Shackleton tents – I can stand it in those tents. I go to my tent and read and hear the crack of glaciers nearby. It is truly awe-inspiring.

I got my B.A. and Ph.D. degrees at the University of Kentucky. Before joining the faculty at Colorado State University (CSU), I was a research scientist and professor at the University of California, Riverside. I have many roles at CSU including Director of the School of Global Environmental Sustainability (SoGES). At SoGES, I established a Sustainability Leadership Fellow Program to train graduate students and post-doctoral researchers to communicate their research.

I have received a number of awards of which I am very proud. These include the President’s Medal for Excellence in Antarctic Research, the 2012 Mines Medal from the South Dakota School of Mines and Technology, Fellow of the Ecological Society of America, and in 2014, I was inducted into the Colorado Women’s Hall of Fame.

I think we need a lot more women in scientific research. Women bring a lot to the table. Science and science research isn’t scary. In fact, it is a lot of fun. I couldn’t have a better job!

Thanks to Jill Tietjen for soliciting this terrific post!