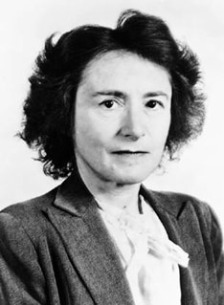 Thanks to Jill Tietjen, regular contributor to Grandma got STEM, co-author of the Bestseller Her Story, A Timeline of the Women Who Changed America, and President and CEO of Technically Speaking, Inc. for this post.

The first American woman to win a Nobel Prize in the sciences (1947 – in collaboration with her husband Carl) was Gerty Radnitz Cori.  They were warned early in their professional lives that Gerty was ruining her husband’s career because “It is un-American for a man to work with his wife.”  In response, Carl told her that collaborating with one’s wife in the 1920s was not un-American, it was just unusual.

Together, the Coris laid the foundation for our understanding of how cells process food and convert it to energy.  Today, the Cori cycle is a basic part of high school science.  At the time it was developed, however, it was revolutionary.  Using the Cori cycle enabled scientists to show how muscles use sugar for quick energy and how muscles and the liver store energy until it is needed.  This understanding is fundamental to the treatment of diabetes.

Others of their discoveries are even more important.  At a time when little was known about them, the Coris identified and isolated the enzymes (proteins that enable cells to function, grow and reproduce) that converted sugar from one form to another.  They were pioneers in the study of enzymes and hormones.  Gerty Cori’s work with inherited disorders caused by enzyme deficiencies led to an understanding of basic chemical processes that is important for physicians and scientists in biology and medicine.  In addition, they trained a generation of scientists; their lab has produced six Nobel Laureates in addition to the Coris themselves.

I had the pleasure of meeting their granddaughter in 1998 when Gerty Cori was inducted into the National Women’s Hall of Fame.  Amazingly, at the time, she worked with my sister in the Research Triangle Park in North Carolina.